SOCIAL MOBILIZATION AND ESTABLISHMENT OF COMMUNITY BASED INSTITUTIONS 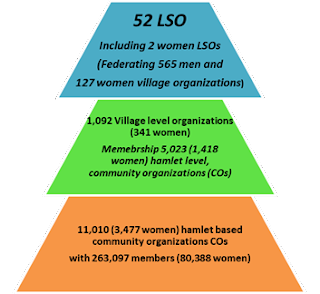 Capacity building of men and women office bearers is in process and so far over 54,625 (18,707-women) activists are trained in technical and managerial skills.
The focus and efforts of the programme is to mainstream poor and vulnerable population in development process and this is verified from the fact that 50% (130,000) of organized members are either from extreme, chronic or poor categories. It is not only poor and vulnerable but women in target areas are also encouraged to participate in the programme interventions, which is evident from formation of 3,820 women community based organizations covering 83,388 women members. Formation of such institutions in patriarchal and religiously charged Malakand division could be termed as one of the major achievements of the programme. Besides creating ‘effective spaces’ for social interaction, these organized forums have also contributed in socio-economic development of women and their families in Malakand Division.
In terms of youth development, a flexible approach has been adopted encouraging youth from programme and non-programme union councils, school going or out of school youth to participate in planned activities and events. So far, the programme has been reached 39,899 youth through a diverse range of activities. Diversity in these activities; physical, environmental, intellectual, awareness and cultural, can be termed as a distinctive feature. 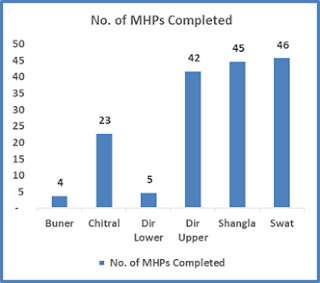 EU-PEACE programme has successfully initiated and completed targeted 165 MHPs in six districts of Malakand Division producing 21.2 megawatt electricity. Through these MHPs over 83,000 households (624,000 population) were provided with renewable, clean and sustainable energy, which has reduced usage of fossil fuels, besides reducing pressure on precious forests. The environmental and economic benefits of these micro hydro projects are worth-mentioning. The current portfolio of 165 units producing 21.2 MW has been a major contributor in reduction of CO2 emissions by 69,000 tons/year. Similarly, these 165 units have reduced cost incurred on kerosene oil from 3 million to 0.34 €- a substantial economic benefit to local population. Interestingly, productive use of sustainable and renewable energy has gained recognition in areas where micro hydro projects have been established. Women and men businesses have flourished (e.g. dried red persimmon) with useful returns (up to 156% increase in income) to further support their families and improve their livelihoods. These MHPs have also contributed in promoting social cohesion at local level especially in post conflict scenario. Community members (16,000 in nos.) from diverse backgrounds and different economic classes/categories have come together at local level to manage and run these MHPs. Availability of uninterrupted electricity has profound impacts on benefiting local economy and improving social sector services. In one of the most famous tourist spots (Kalam Valley), local hotels are now connected to EU-PEACE MHPs benefiting nearly 1000 tourists/day in summer season. In absence of renewable/sustainable energy these hotels were compelled to use diesel/gasoline based generators, which on one hand had a negative impact on environment while on other it was heavy on pockets thus cutting down profits of local hotels.
These MHPs have also promoted over 1,500 local enterprises (flour mills, welding machines, gasoline station, grocery shops etc.) to generate local employment and benefit local economy. Field data reveals that 120 boys’ and girls’ schools with a total strength of over 22,000 children are connected to especially larger units established under EU-PEACE. The computer labs are again functional and electricity is available to make class rooms comfortable in harsh summers or winters. Furthermore, at-least 3 hospitals and 14 Basic Health Units are also availing services in programme areas catering to needs of over 1,000 patients per day mostly women and children. Availability of electricity at BHUs has ensured availability of vaccines and operationalizing pathology lab at local level saving travelling time/cost. Through an access to un-interrupted electricity, living conditions of programme beneficiaries have improved substantially. New gadgets including washing machines, butter churners, satellite televisions, computer, cell phones, fans etc. have been acquired by community members which has resulted in adding to, especially women’s, comfort and access to international media for infotainment. 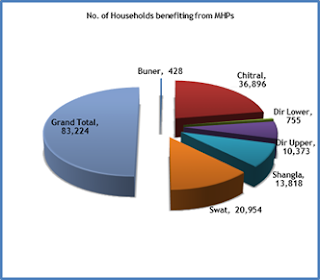 Comparing the figures with baseline, it is evident that SRSP-EU PEACE programme has been able to cover whole of the deprived population through these improved/refined MHP. PEACE programme has achieved yet another major milestone and it has enabled
The partnership between EU and SRSP resulted in improving existing technology and bringing in technical and technological improvements to maximize efficiency and effectiveness of respective units have been key features of the programme. The rich blend of EU funding and technical/technological know-how of SRSP improved the rudimentary systems of 1990s. and SRSP successfully implemented power projects of larger capacity production i.e. 1.2 and 2 megawatts in addition to small units. The key features and improvement in technology and provision of quality services through EU- PEACE programme has been acknowledged at all levels and by key energy stakeholders. Comprehensive case studies on EU-PEACE micro hydro projects have been shared widely with national and international audience/organizations e.g. UNIDO, UNEP, UNFCC, Energy Initiatives, Energy Globe, and Ashden, UK. Based on its potential, innovative approach, services, replicability, and sustainability, the micro-hydro projects under PEACE programme were visited by an international judge appointed by Ashden UK. Competing against 214 organizations across the globe SRSP (based on MHPs initiated under EU-PEACE) was selected as one of the five winners for improving and enhancing access to sustainable energy. The award was presented in June 2015 at Royal Geographical Society, UK. The event was widely covered by print/ electronic media in UK which facilitated in raising awareness about SRSP and EU-PEACE programme globally. In 2017, competing against 2,000 applicants from 178 countries, EU-PEACE MHPs were selected as National winners of Energy Globe Award and UK initiative Award for initiating community led and managed MHPs in most harsh and fragile environments

Under this specific component, SRSP followed a two pronged approach to improve basic social services; a) rehabilitation and improvement of government schemes predominantly in health and education in collaboration with public institutions and b) Identification, implementation and maintenance of productive infrastructure schemes through an active role of local communities.
Following this approach, EU-PEACE has initiated and completed 658 infrastructure schemes with a cost of PKR 898 million with public institutions and local communities. This comprised 141 government facilities and 517 communities’ based small scale infrastructure schemes. These infrastructure schemes have enhanced access of 183,964 members to following basic social services in all 7 districts;
Following RSPs approach, operation and maintenance committees have been constituted and their capacities enhanced in maintaining these schemes. The district and type wise details are presented in the following tables

The fourth component of PEACE project corresponds to increase in self-confidence of women and their ability to independently participate in social and economic activities.

In accordance with local norms and culture, SRSP started its interventions with a meticulous approach under the PEACE programme that paved way for other women activities in patriarch and religiously charged Malakand Division. To be relevant to local context while keeping pace of activities at optimum level, EU-PEACE developed 507 women master trainers to facilitate formation of community based organizations and undertake women interventions under PEACE programme. With this new woman work force, noticeable achievements, if not amazing, have been observed. 6,036 women have been provided with basic literacy and numeracy skills through establishment of 240 Adult Literacy Centers (ALCs). To engage women in economic development and become an earning hand, the programme has constituted 91 Business Interest Groups (BIGs) covering over 1,500 women entrepreneurs’ along-with identification of potential trades.

In addition, women staff also identified 8,000 potential/existing entrepreneurs within women community institutions. Encouragingly, 7,830 of the identified 8,000 potential/existing entrepreneurs have been trained by EU-PEACE programme. On one hand basic enterprise development skills were imparted, while on other skills of existing/potential entrepreneurs have been refined. This resulted in establishing new women led businesses in Malakand division providing decent earning opportunities to women. Upon successful completion of skill development trainings, 6,001 trainees were provided with livelihood resources or tool kits to establish economically feasible and financially viable small scale businesses.

The fifth component of SRSP-EU PEACE programme relates to the growth of economic activities, where SRSP would be facilitating 4,000 farmers/producers in Malakand division.In this regard, SRSP has adopted a comprehensive approach for establishing and supporting potential value chains, small scale enterprises and entrepreneurs under PEACE programme. Formation of Business Interest Groups (BIGs), enhancing and refining business skills at local level, exposure visits, orientation on markets/trends and linkages with renowned and known business development services providers are few major achievements under this component. So far the programme has been able to organize over 4,972 farmers (676 women) in 401 (49 women) Business Interest Groups (BIGs). A total of 4,014 (953 women) farmers were provided with numerous trainings in value chain development. Depending on nature of value chains or businesses, at least 4,271 (642 women) farmers/producers were exposed to major provincial and national markets besides developing their linkages with Business Development Service Providers (BDSPs), which has improved and refined products as per national and international standards. District specific value chains based on agro climatic suitability and comparative advantages of respective areas have been identified and supported under the programme 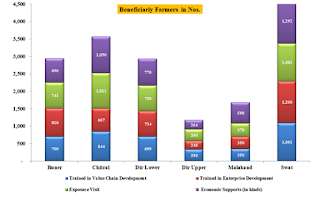